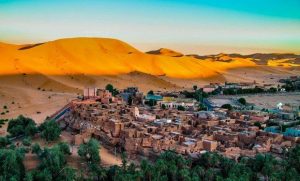 Planning a trip to North Africa is an exciting and infinitely rewarding experience. However, there is so much to see and do, and deciding on an itinerary can be challenging. Adrenaline junkies should consider a trip to the ski slopes in Morocco or to the underwater coral reefs in Egypt. Those with a passion for stunning scenery should plan a tour of the Sahara Desert, while history buffs will love Egypt’s treasure trove of ancient monuments. Wherever your adventures take you, try to visit at least one of the following popular destinations in North Africa:

Perhaps the most famous tourist attraction in ancient Egypt, the Pyramids of Giza are located just outside Cairo. Comprised of three different pyramidal complexes, the site is one of the original Seven Wonders of the World. Of these, it is the oldest and the only one still surviving today. The three main pyramids served as tombs for Pharaohs Khufu, Khafre and Menkaure. The Pyramid of Khufu (also known as the Great Pyramid of Giza) is the largest and dates back about 4,500 years. In front of the pyramids is the Great Sphinx, a cat-like statue carved from a single block of stone. ·

Located at the foot of the Atlas Mountains, Marrakesh is one of the four imperial cities of Morocco, It is one of the most exciting cities in North Africa. Visitors come to Marrakesh to hunt for treasures in the medina’s souks, or to sample authentic Moroccan cuisine in the central square, Jemaa El Fna. Beautiful riads and quiet hammams add to the experience, while the city’s historical monuments are well worth seeing. It offering a complete visitor experience, Marrakech conveys a perfect blend of old and new architecture, it is exciting, colorful and vibrant, making it the perfect destination for a group of friends traveling together.·

Luxor was built in and around the ancient site of Thebes, once the richest city in ancient Egypt. The modern city has its own magnificent temple, as well as a series of excellent museums. Near Luxor is the ancient site of Karnak, which was the most important place of worship of the ancient Egyptians. Here you’ll find an impressive array of sanctuaries, kiosks, towers, and obelisks, all dedicated to the gods of Thebes. On the other side of the Nile from Luxor are the royal burials known as the Valley of the Kings and Valley of the Queens.   ·      Fes, Morocco

The most complete medieval city in the Arab world, Fes is a strange and eccentric mixture of medieval meets modern world. Fes was the capital of Morocco more than 400 years ago and is still considered the religious and cultural center of the country today. The distinguished old medina of Fes el-Bali is well worth a few days of walking in itself, and the tanneries of the Medina make it a great visit.·

There are many reasons to visit the capital of Tunisia. In particular, Tunis’ ancient medina rivals that of the Moroccan medinas in Marrakech and Fes. The city is also home to one of the best museums in North Africa, the Bardo National Museum. It is housed in a beautiful palace and filled with treasures found at numerous ancient sites throughout Tunisia.    North Africa is one of the most historically rich places in the world as well as being a great tourist spot, meaning you can enjoy your holiday by the pool or inside a museum according to your personal preference.